In part 1 of this exciting 2-part blog series, I argued, quite elegantly I think, that DevOps certification is perhaps not the single greatest breakthrough in the advancement of software delivery since the invention of computing. In this part, I’ll attempt to go into even further detail in support of my hypothesis…
At an agile conference last year I did a quick survey to see what people valued the most about Agile Cerification. The results were conclusive, not one single person said they valued the certification itself. Most people said they thought the training was the most valuable thing, and I can understand that 100%. Quite rightly, people valued the knowledge they had gained and the content they’d been taught over a certificate they walked away with. 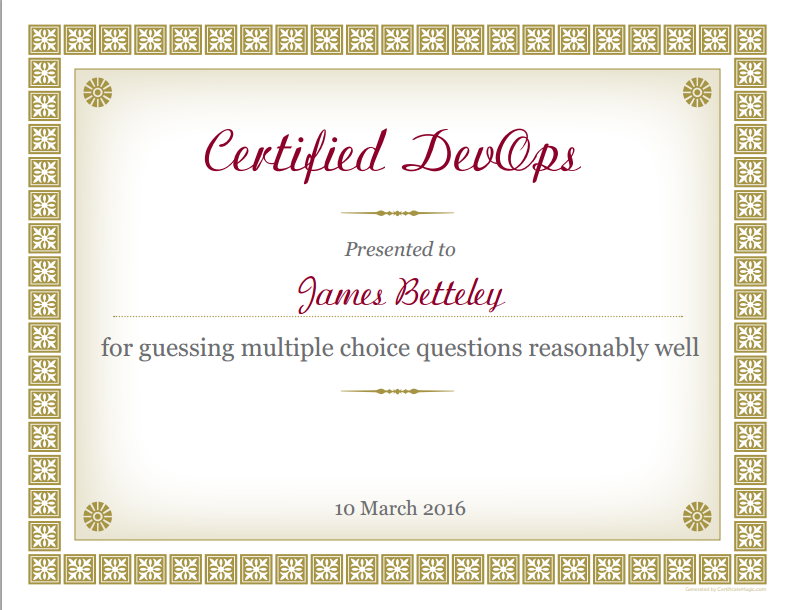 But certification is still very popular, and that’s hardly surprising when you see how many people advertise roles for “certified” scrum masters. But the abundance of certified scrum masters doesn’t seem to have done much, in my view, to help progress the agile movement as a whole. In fact, I’m more inclined to believe that some “agile” certification has done more to confuse and derail the agile movement than to actually help it.
Here’s why:
Organisations think they’re agile because they’ve hired some certified scrum masters (or sent some people to get scrum master certification). I’m sorry, but hiring a certified scrum master makes you no more agile than hiring a violinist makes you an orchestra.
I’m not going to try to make excuses for misunderstanding the very meaning of “agile”, but it’s pretty easy to see how some people might think “well I’ve now got these Scrum Masters for christs sakes, MASTERS – not just any old scrum practitioners, and they’re certified! So if that doesn’t make us agile then why did I spend so much money on sending them on that certification course!?!!” (Answer: because you stoopid). Scrum certification is “reassuringly expensive” (genuine quote right there), and is VERY useful for teaching people about how to run scrum, but it doesn’t make you agile. Don’t be fooled by the price tag and the highly egotistic “Master” title.

As part of my role as a consultant, I sometimes get asked to assess organisations agility. More often than not I get told “Oh we’re agile, we do scrum”, or “Oh we’re agile, we do sprints and have stand ups” and that sort of thing. These things, sadly, don’t necessarily make you agile. They’re just things. But one big problem in the software delivery world right now is that many people DO think that those things “make you agile”, and that’s all there is to it.
The silver lining for me of course, is that I get quite a bit of work out of it! I get to help some of these organisations realise that thier ability to do scrum, and their overall agility are two quite separate things.

And this brings me round to DevOps.
The DevOps world has an identity crisis every bit as bad as the agile world. Where agile suffers from people confusing the link between “agile” and scrum, in DevOps we suffer from people believing DevOps means Automation.
To be clear, DevOps doesn’t mean Automation. There’s already a word for Automation, and that word is Automation.

For me, DevOps is about the way in which teams work in order to create high quality products from Operational and Development perspectives.

Sure, automation can play a part in that, but it’s only a part.
Part of my role is to help teach people about how to unlock the power of DevOps, and to do that I usually have to start by explaining what DevOps is and what it isn’t. We call this the “Education” piece, because that’s exactly what it is – it’s not simply a case of defining something and drawing up a glossary, we’re literally opening people’s eyes and minds to what DevOps actually is, and what it can do for organisations who do it properly.
At one point we even thought about formalising this DevOps Education and even providing some sort of certification or professional credits system, but we quickly realised that this was utter bollocks.
The thing is, you can’t certify something that doesn’t have a commonly agreed definition, and you can’t certify a philosophy. You can certify actions and behaviours, and how well people understand particular frameworks (like scrum for instance), but you CAN’T CERTIFY A PHILOSOPHY. And anyway, who are these self-proclaimed guardians of the DevOps philosophy? These people who are so sure that they not only understand DevOps better than the rest of us, but also believe they’ve stumbled upon the perfect training program for passing this most precious wisdom on to people who attend their course? It must be a veritable who’s who of the DevOps movement, the Adrian Cockrofts, Jez Humbles, Patrick Dubois and John Allspaws of this world… Hint: it isn’t.
It’s almost as if the whole thing is just a scheme to make money! Imagine that!