A couple of weeks ago I was at an Experience Devops event in London and I was talking about how software delivery, which is quite often compared to a manufacturing process, is actually more comparable to a professional sports team. I didn’t really get time to expand on this topic, so I thought I’d write something up about it here. It all started when I ran a cheap-and-nasty version of Deming’s Red Bead Experiment, using some coloured balls and an improvised scoop…

I was first introduced to Deming’s Red Bead Experiment by a guy called Ben Mitchell (you can find his blog here). It’s good fun and helps to highlight how workers are basically constrained by the systems the work in. I’ll try to explain how the experiment works:

Now, given the number of red beads available, it’s unlikely the players will be able to collect exactly 10 beads in each scoop. In my especially tailored system I told the players to keep their eyes closed while they scooped up the balls. I also had about half as many red beads as any other colour (I was actually using balls rather than beads but that doesn’t matter!). The results from the first round showed that the players were unable to hit their targets. So here’s what I did:

Again, the results will be pretty much the same. So…

In the end, we’ll hopefully realise that incentivising and threatening the players has absolutely zero impact on the results, and that the numbers we’re getting are entirely a result of the flawed system I had devised. Quite often, it’s the relationship between workers and management that gets the attention in this experiment (the encouragement, the threats, the singling out of individuals), but I prefer to focus on the effect of the constraining system. Basically, how the results are all down to the system, not the individual.

I think one of the reasons why the software industry is quite obsessed with traditional manufacturing systems is because of the Toyota effect. I’m a huge fan of the Toyota Production System (TPS), Just-in-time production (JIT) Lean manufacturing and Kanban – they’re all great ideas and their success in the manufacturing world is well documented. Another thing they all have in common is that various versions of these principles have been adopted into the software development world. I also happen to think that their application in the software development world has been a really good thing. However, the side-effect of all this cross-over has been that people have subconsciously started to equate software delivery processes with manufacturing processes. Just look at some of the terminology we use everyday:

It’s easy to see how, with all these manufacturing terms around us, the lines can become blurred in people’s minds. Now, the problem I have with this is that software delivery is NOT the same as manufacturing, and applying a manufacturing mindset can be counter-productive when it comes to the ideal culture for software development. The crucial difference is the people and their skillsets. Professionals involved in software delivery are what’s termed as “knowledge workers”. This means that their knowledge is their key resource, it’s what sets them apart from the rest. You could say it’s their key skill. Manufacturing processes are designed around people with a very different skillset, often ones that involve doing largely repetitive tasks, or following a particular routine. These systems tend not to encourage innovation or “thinking outside of the box” – this sort of thing is usually assigned to management, or other people who tend not to be on the production line itself. Software delivery professionals, whether it be a UX person, a developer, QA, infrastructure engineer or whatever, are all directly involved in the so-called “production line”, but crucially, they are also expected to think outside of the box and innovate as part of their jobs. This is where the disconnect lies, in my opinion. The manufacturing/production line model does NOT work for people who are employed to think differently and to innovate.

If Not Manufacturing Then…

Ok, so if software delivery isn’t like manufacturing, then what is it like? There must be some analogous model we can endlessly compare against and draw parallels with, right? Well, maybe…

I’m from a very rural area of west Wales and when anyone local asks me what I do, I can’t start diving into the complexities of Agile or devops, because frankly it’s so very foreign to your average dairy farmer in Ceredigion. Instead, I try to compare it with something I know they’ll be familiar with, and if there’s one thing that all people in west Wales are familiar with, it’s  rugby.

It’s not as daft as it sounds, and I’ve started to believe there’s actually a very strong connection between professional team sports and Agile software development. Here’s why:

Software delivery is a team effort but also contains subject matter experts who need to be given the freedom to put their skills and knowledge to good use – they need to be able to improvise and innovate. Exactly the same can be said of a professional rugby or soccer (yes, I’m going to call it soccer) teams. Rugby and soccer are both team sports but both contain very specific roles within that team, and for the teams to be successful, they need to give their players the freedom and space to use their skills (or “showing off” as some people like to call it). 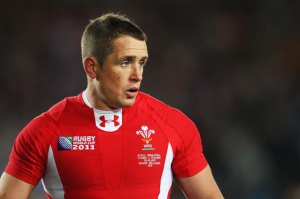 Now, within a rugby team you might have some exceptionally talented players – perhaps a winger like former World player of the year Shane Williams. But if you operate a system which restricts the amount of involvement he gets in a game, he’ll be rendered useless, and the team may very well fail. Even with my dislike of soccer, I still think I know enough about how restrictive formations and systems can be. The long ball game, for instance, might not benefit a Lionel Messi style player who thrives on a possession & passing game.

The same can be said of software delivery. If we try to impose a system that restricts our individual’s creativity and innovation, then we’re really not going to get the best out of those individuals or the team.

So Where Does Agile Fit Into All of This?

Agile is definitely the antidote to traditional software development models like Waterfall, but it’s not immune from the same side-effects as we witness when we do the red bead experiment. It seems to be that the more prescriptive a system is, the greater the risk is of that system being restrictive. Agile itself isn’t prescriptive, but Kanban, XP, Scrum etc, to varying degrees are (Scrum more prescriptive than Kanban for instance). The problem arises when teams adopt a system without understanding why the rules of that system are in place.

For starters, if we don’t understand why some of the rules of Scrum (for instance) exist, then we have no business trying to impose them on the team. We must examine each rule on merit, understand why it exists, and adapt it as necessary to enable our team and individuals to thrive. This is why a top-down approach to adopting agile is quite often doomed to fail.

So What Should We Do?

My advice is to make sure everyone understands the “why” behind all of the rules that exist within your chosen system. Experiment with adapting those rules slightly, and see what impact that change has on your team and on your results. Hmmm, that sounds familiar…